This post is inspired in Robert Martin’s video about Clean Code fundamentals.

The aim of this post is to show why Clean Code is so important. Having Bad code leads to a decrease in the productivity, provoked by a growing mess created in the code that makes it rot.

This will be the first of a group of posts related with Clean Code: how to write clean code, TDD, SOLID principles, …

Anybody that has worked in a greenfield project has experienced the feeling of being able of producing features at high speed, of having total control, of knowing exactly which classes or methods would be affected by a new feature or change request. However… this feeling did not last too much, and productivity started to slow down.

After a few weeks or months, a mess starts to grow in the code. 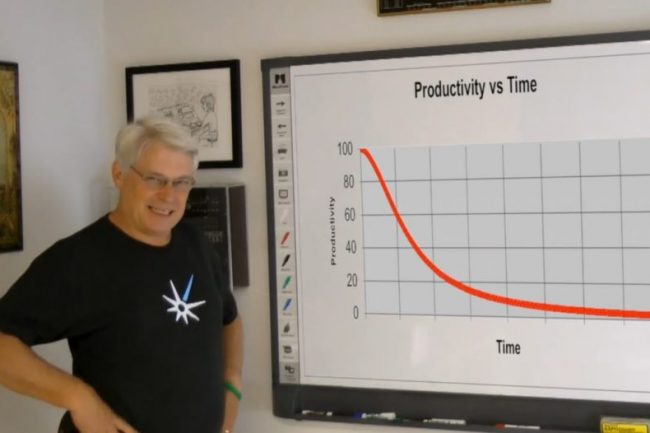 The more that mess grows, the harder to add new features or modify existing ones.

“Adding manpower to a late software project makes it later”

Fred Brooks in his 1975 book The Mythical Man-Month

In the short-term it is expected that by adding manpower to a team, performance will decrease, because original team members that produce must teach new resources, and this limit his production capacity. However in the mid-term, performance should increase, once new resources start to produce.

So, productivity is more similar to next picture:

“Given sufficient time, any group of programmers will decide to rewrite the code.”

After the mess, after the lose of productivity, after adding more resources… The team rebels and management accedes to the redesign.

Where are the requirements? Of course in most of the cases there won’t be an up to date documentation, this means that requirements are in the code.

While the “Tiger” team works in the redesign, rest of programmers continue maintaining the solution, i.e. adding more requirements or modifying existing ones: the race has started!

After some time code starts to rot. Following list shows characteristics of bad or rotten code:

The only reason the code goes bad is because we ruin it. We are the ones who made the mess. We rot the code.

But we got to go fast

It is unprofessional for programmers to bend to the will of managers who don’t understand the risk of making messes.

“Whenever you rush, you make a mess.”

How many times you have said to yourself: “But we can always go back and clean it later”? You know this means you are never going to go back at all.

Speed is an illusion. Shortcuts at the end are never short.

If you want to go fast, you have to stay clean.

What is Clean Code?

Following quotes are the definition on what is clean code from some authors:

“Clean code always look like it was written by someone who cares.”

“I like my code to be elegant and efficient… clean code does one thing well.”

“You know you are reading clean code, when every routine you read is pretty much what you expected.”

Code is read more than it is written (just think on your last edit session).

“Leave this world a little better than you found it.”

What if you did that with your code? Then code would get better and better.

It is not enough to write your code well. The code has to be kept clean.

Code is clean if it can be understood easily – by everyone on the team. Clean code can be read and enhanced by a developer other than its original author. With understandability comes readability, changeability, extensibility and maintainability.

Detailed rules to be applied to obtain clean code will be described in a next post, these are some of them: